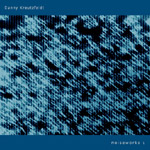 The fifth release for Mirakelmusik. This time it's none other than the Danish laptop artist Danny Kreutzfeldt who brings us the music. You might know him from his great releases on Thinner, Autoplate and Databloem etc. or perhaps his live appearances.

If you've heard some of Dannys other releases you're probably used to rather soft sounds, Noiseworks 1 shows us a harder and more noisy side of him, which has only been publicly shown live or as soundinstallations throughout Denmark before. Noiseworks 1 is made of five different musical experiments, the sound varies from a harsh and thick walls of noise to softer more delicately constructed almost stringlike noise.

If you believe that a lot of important noise were lost in the encoding of these mp3s you're lucky. This album is also availiable as a limited cdr of 50 numbered copies.
Check out the Mirakelmusik homepage for more information: http://www.mirakelmusik.tk/

Reviewer: Acidhive - favoritefavoritefavoritefavorite - November 18, 2005
Subject: Noise with purpose
Quite good actually. This crosses boundaries between ambient/drone/noise and does so in a pretty good fashion. However, there is some pointless harshness here. But, unlike some noise/power noise most songs actually build up and have purpose. The longest track I like the most and this is an excellent cross between the 3 mentioned genres. I'd get this for that track alone, which is a stormer. The rest is just your average noise/power noise. If you dig that you'll dig the rest of the songs too. Me, I only really like the Light Within. Oh yeah! 4 stars just for that one.